I have decided to begin germinating some seeds. It may be a little early, but the seeds are New Guinea Impatiens. The packet says 8-10 weeks before the last frost. Here's a great link to the Old Farmer's Almanac- http://www.almanac.com/
There you can find all the info you need on seed starting and frost dates.

It's important to start seeds in the right mixture. You can buy medium that says it's seed starter but I just prefer to mix my own. Here's what I use in my mixture - 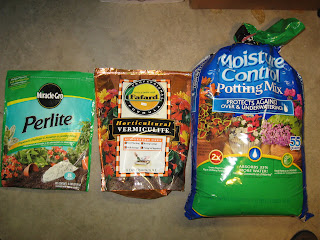 Then I select a suitable tray depending on how many seeds I will be germinating. In the case of the impatiens the packet states 25 seeds. You need to plan how much space each seedling will need in the tray so that they are not overcrowded. Also you need room to prick the seedlings out of the tray when the time comes.

Now it's time to get your hands back into the soil. I grab about a handful of each part of my mix as you can see here - 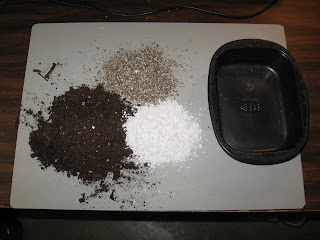 The number of handfuls required will be determined by the size of your tray. Then dump the mix into a bucket and (VERY IMPORTANT) spray with water. You don't want to breath any vermiculite or perlite dust! Spray it down as you mix it up. 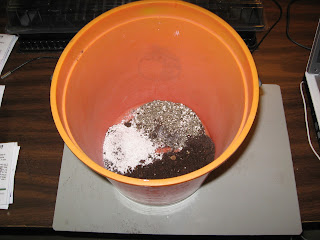 As you create your seed starter pick out any large sticks or other debris in the soil mixture. Then fill the tray and spray some more water on to just dampen it. Since I am starting impatiens and they are very small seeds I put a thin layer of vermiculite on top. It will help to hold the moisture but won't smother the seed. 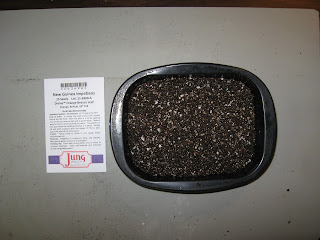 Now carefully open the seed packet and make a fold in the flap. Shake a few seeds toward the end of the flap. Place each seed in the seed starter medium. In this case I put 5 seeds in 5 rows, and I think they gave me a couple extra so I placed those between rows. 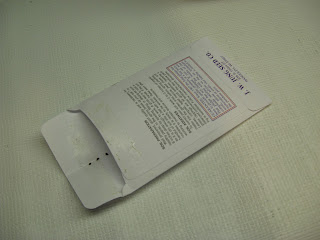 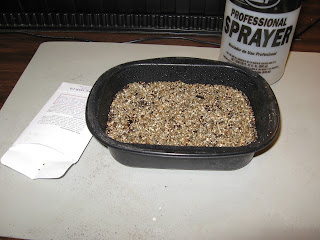 The seed packet recommends that you "plant the seed in a sterile planting mix but do not cover as light aids in germination. Bottom water or mist to avoid covering the seeds".

Here are the hydration tools for applying moisture. - 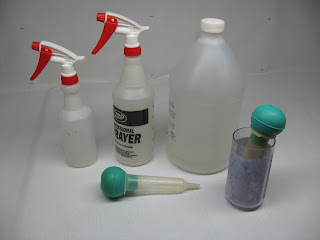 Mist the seeds very carefully, don't drown them, just enough spray to moisten them and the mix.
Two very important factors in successful germination are moisture and temperature. Until the seeds begin to sprout, keep them moist. As for temperature don't assume that because you keep the ambient air temperature at say 70 degrees that the soil temperature will be the same. The same way that perspiration cools the body, evaporating water will cool the soil. A couple years ago I invested in a heating pad for the seed flats and last year I purchased a sensing probe and thermostat for the germination trays. 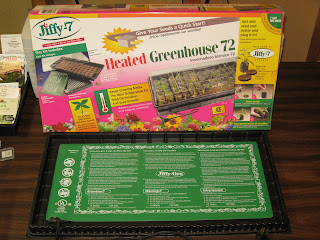 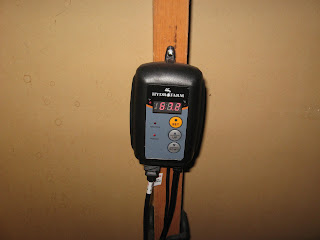 The probe is inserted into a layer of the starter mix and then I set the thermostat to 72 degrees. 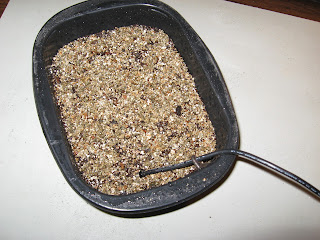 I placed the tray on the seedling flat and put on the clear top cover. Then I positioned a fluorescent clamp light over the tray. I will leave the light on 24hrs a day until I see the seeds sprout. Here is the set up, now it's just a matter of time and keeping the tray moist. 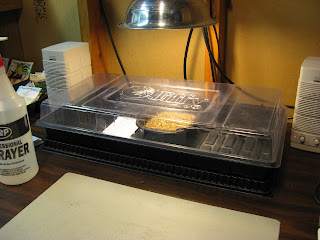 All this was done on Saturday, February 26, 2011. Now wasn't that easy? Coming in the next post, more information on the Lavatera.
Posted by JohnT at 6:47 PM No comments:

A SEED - A PROMISE

A seed is a promise of spring. Last fall, as we got closer and closer to a killing frost, I wandered the gardens knowing in a few days all the flowers would be dead. In the squash vines was a pretty pink flower still blooming. Some of the flower heads had set seeds. I decided to harvest those seeds. So each afternoon I carefully removed the seed heads that were mature. I also tried to harvest some marigold seeds. Harvesting seeds is not only cost saving but also therapeutic. It's convincing yourself that even though winter is on its way THERE WILL BE A SPRING. Planting tulips in the fall is another therapy I recommend. It provides self encouragement to survive the winter. You want to make sure you see that five dollar bunch of bulbs bloom.
Starting out in this world I had no clue that you could harvest seeds. I guess we are enticed to learn of the birds and the bees to the point of infatuation. It's not until later that we discover the flowers and the trees. Working in Rochester I met an old woman who was planting seeds. She showed me that she had picked the flower heads last year from her marigolds. That spring day she showed me how to clean the seeds and plant them. I was amazed and then realized how naive I had been. The seeds have got to come from somewhere. Many flower seeds can be harvested that way, but if the plant is a Hybrid the next generation will not exhibit the same characteristics. So don't get your hopes up or expect that you can buy one flower at the greenhouse and save seeds for next year. I have high hopes though for the seeds I harvested. This winter I paged through my seed catalogs and identified the flower that was growing in the squash. Here is a pretty close picture of what I found growing in my garden. 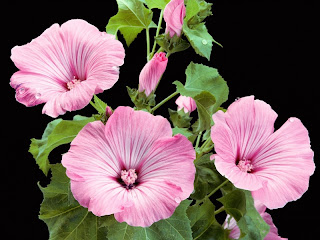 LAVATERA
﻿This is where the seed catalogs really come in handy. It says Germination: 14-30 days, 65-85F. Well-drained soil. I have (STGT) Seeded To Germination Tray five of those harvested seed. It may be a little early to start them unless it actually does take 30 days for germination. We shall see if they are viable. I hope to plant them around the mail box this year. The soil there is "well-drained". I have found the seed catalogs to be very good reference material. But if all else fails a simple google search can provide the same information.
One final note, where did the Lavatera come from? Many years ago I received a free packet of seeds along with my order. The packet was a wild flower mix of seeds. I planted those in the garden. Over the years this little pink flower has managed to keep the cycle of life going all by itself. I wonder now if it will allow me to participate in that cycle?
Posted by JohnT at 6:03 PM No comments:

Anyone who is considering gardening for a hobby is encouraged to write down a log of their activities. I have been reviewing my past logs to see when the optimum time is to begin starting the seedlings.
As the title states TIMING IS EVERYTHING.
The first and foremost thing to consider with plants that are started indoors is when you will be able to move them outdoors. All of the plants I intend to grow inside are not cold hardy plants. So I figure that in Minnesota the safest time to plant them outside is after Memorial day. In fact I just use June 1st as a date of reference for starting the seeds. Most seed packets will tell you how early to begin planting. So I take June 1st and work backward however many weeks the packet specifies. Also, it is much better to be immature in the spring than over grown and root bound. Young immature seedlings will catch up and adapt better than leggy overgrown ones.
Now this is where the log book comes in handy. The seed packets only give averages, "individual results may vary".  A review of your log books during and at the end of the growing season will give you insight for the next season on what worked well and what should be modified. For instance, over the years I've learned that pepper plants need to be started 2 weeks ahead of the tomatoes. I just learned last year some pepper varieties need an earlier start than other ones. So bottom line, keep a log book. This blog is going to serve as my primary log book. The reason I mention that is to warn readers rather than to boast. At times it will be boring, maybe it already is? I just needed to state that it's primary purpose is for reference. 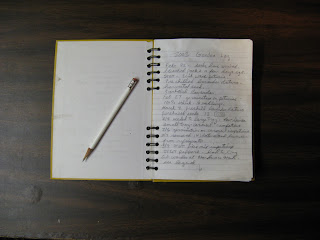 They say that a picture is worth a thousand words. If that's the case, what is a picture of words worth?


These are pictures of the packing slips for this years seeds. 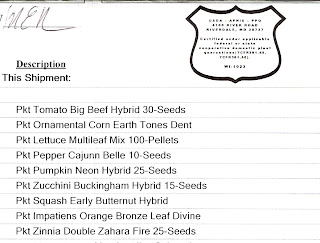 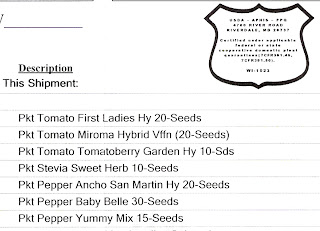 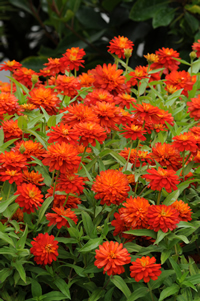 ﻿Zinnia Double Zahara Fire
These Zinnias performed so well last year that they have been requested for a return showing this year. Last year in the test garden they were matched against the Moonsong Deep Orange Marigold and these Zinnias won. Both were AAS winners in 2010. I harvested some seeds from the Marigolds and plan on trying to grow them again. I was unable to get any viable seeds from the Zinnias so I had to purchase more.
One down side to the Zinnias, earwigs love them.

The Seeds are here.

I have received the seeds that I ordered from catalogs. Every year at about the turn of the year the seed catalogs come in the mail. They are nice to page through during those cold days in January. The catalogs usually list the All American Selection winners for the year. Here is the link to their web page -

http://www.all-americaselections.org/
These are seeds you won't find at the local hardware store or even Walmart. There are usually one or two "new" varieties that I like to try so I order them on-line and try to get the best deal. If you order just once from one of these catalogs I think they will send them to you each year until long after you're dead. Although I am not anxious to confirm that.
Posted by JohnT at 6:40 PM No comments:

A RAINY DAY IN FEBRUARY 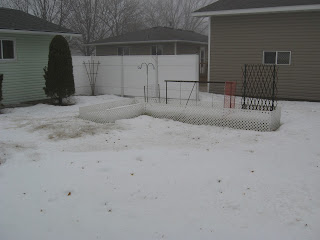 It's raining this morning in Southern Minnesota. But we still have a lot of snow to get rid of. Someday this garden will be green again. Of course right now we would settle for just brown and muddy. ﻿
Posted by JohnT at 11:17 AM 1 comment:

WELCOME TO THE GROW CENTER! 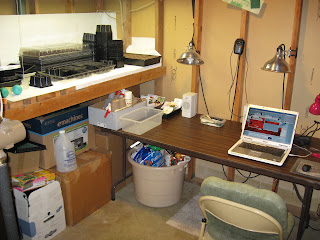 And so begins another season in Minnesota for gardening. With the help of my wife the grow center was cleaned and organized. The process of beaching the growing packs has been completed. Here is a picture of the GROW CENTER.﻿ It's important to clean and somewhat sterilize anything that the plants will grow in or have contact with. Regular chlorine beach seems to work well for the task. The next step is to inventory and organize the seeds for the coming season.
Posted by JohnT at 11:08 AM No comments: