Okra and a Makeover

I'd grown Okra in years past but never really had much luck doing it. But those times I had direct seeded it to the garden. Last year I started the okra seeds indoors using egg cartons. The seedlings grew quickly but were tall and leggy so when I transplanted them I put them in rather deep. Here's a picture of them about a month after planting outside. 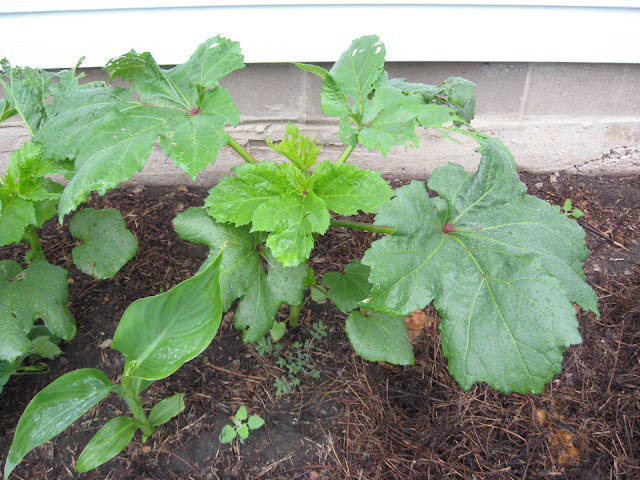 I planted them on the south side of the garage along with some squash that I'd started in peat pots. 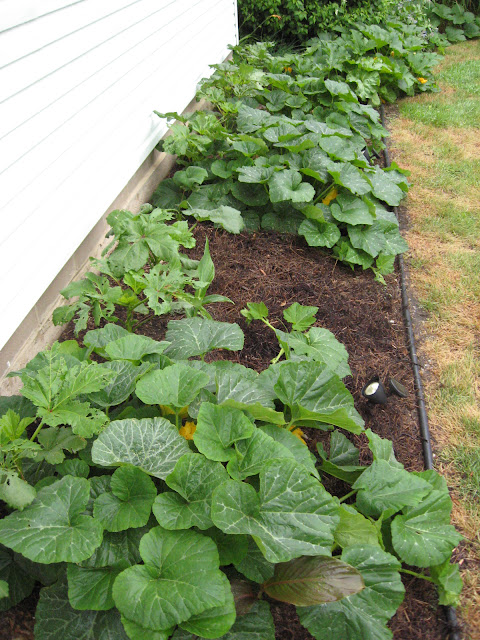 Here they look like they are competing with the squash vines but they quickly grew taller and taller. 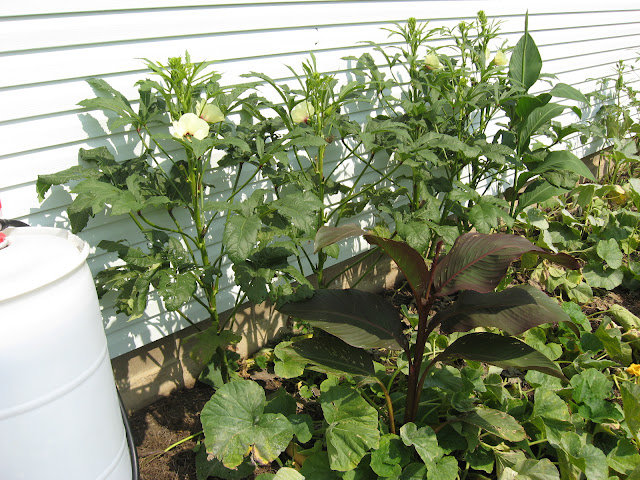 The leafy bronze plant is Canna that came up on its own. I lifted that tuber in the fall and I hope to replant it this spring. But look at that Okra! It was about 5 feet tall at this point and with beautiful blooms. 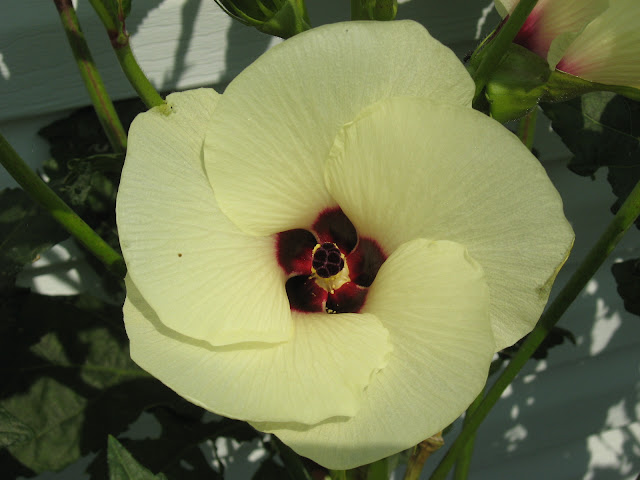 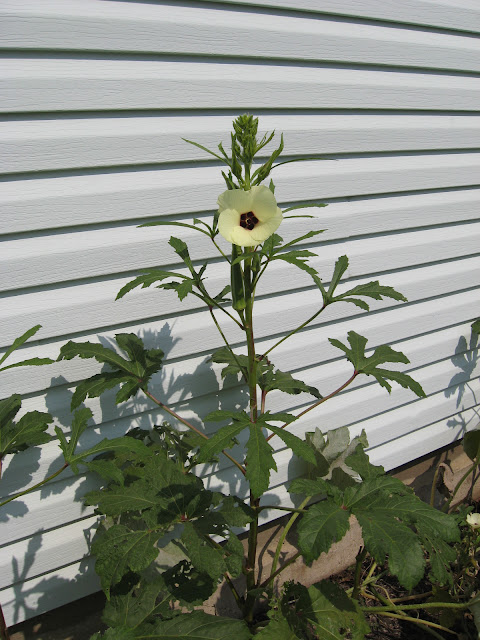 In fact I was so proud of the flowers that I sent a photo into the local TV station and was selected as the winner for that week.

This area of the garden was perfect for the sun loving okra. I couldn't keep up with the harvest of the pods.

Now in regards to the makeover this is what it looked like on the south side of the garage last year.

On the left hand side you can see the Russian Olive bushes. These bushes/trees became overgrown and hard to manage. So we had them removed and ground out and then installed a fence in their place.
This photo is late summer showing the fence and garage after the makeover.

This was a rather small part of the makeover. We also had two large Silver Maple trees removed from the east side of the property. This spring I hope to post some before and after photos of that extreme makeover.

Now a follow up to my April posting of the New Guinea Impatiens. Here's the 2015 post -http://www.mngreenhouse.com/Impatiens


The impatiens grew and here are some pictures of the progression. 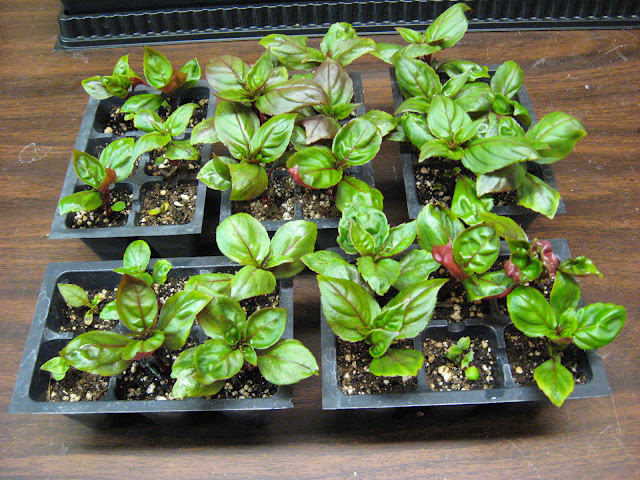 They are starting to outgrow the 6 packs. 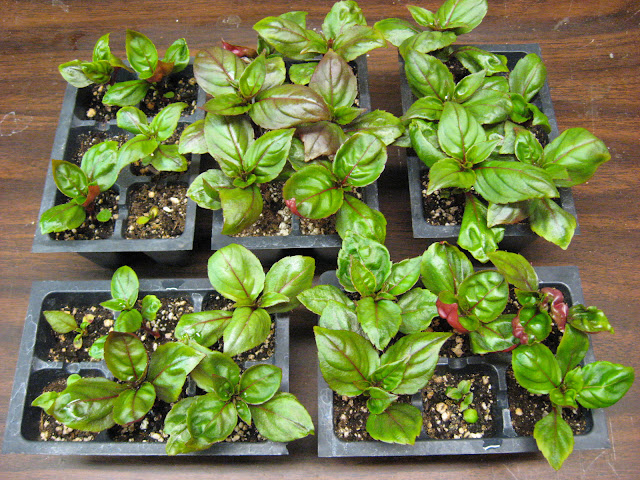 Time to up plant them to bigger containers. 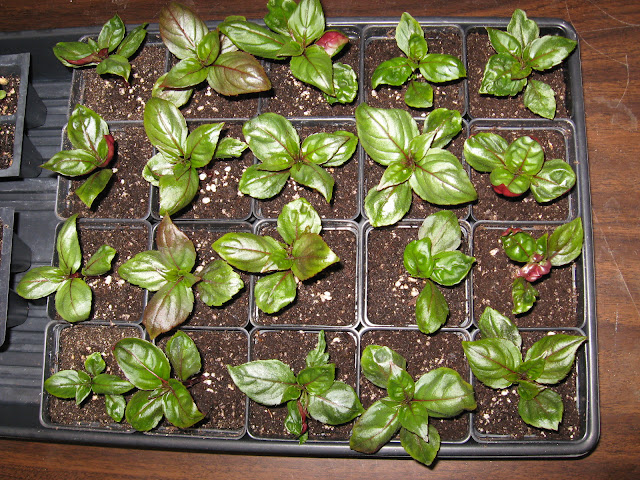 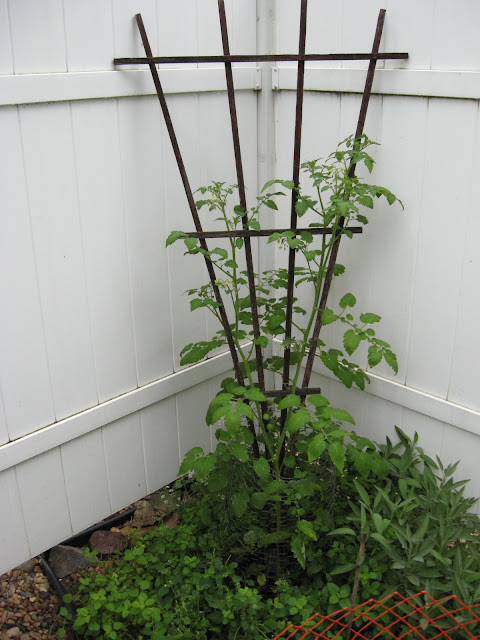 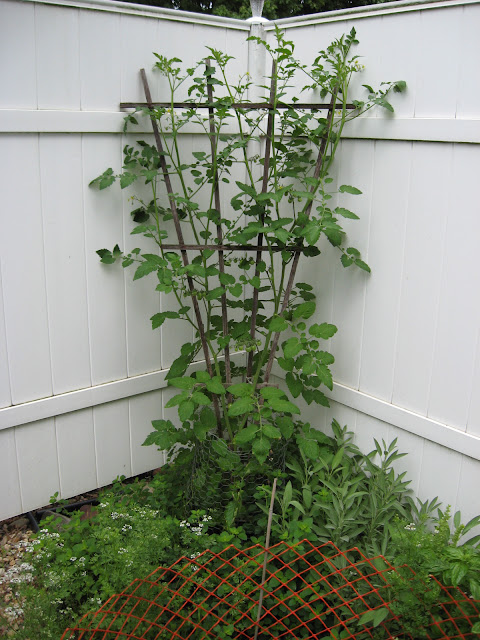 Six months ago my purple beans began to flower. A few days later I had beans growing on the plants. This variety is called "Amethyst", these are the beans on the plant. 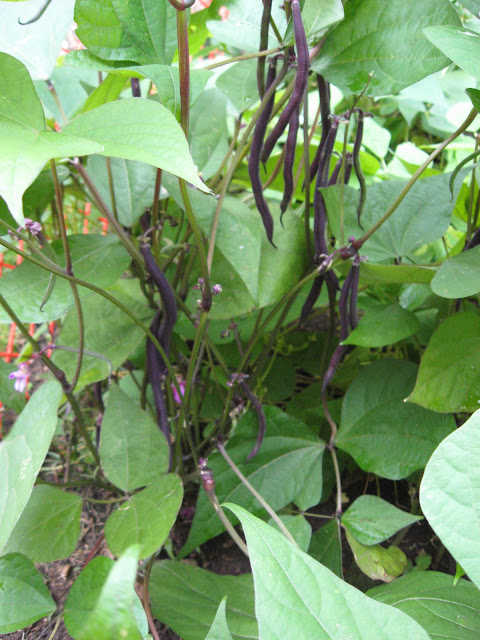 As you can see the purple color really makes the beans stand out and makes for easy picking. These purple beans taste the same as green ones and they turn green when cooked. Which is nice if you have some fussy eaters.

The Marathon begins. It's the middle of January with low temperatures around ten below and not much to do except look out the window at the snow and cold. This is when a Minnesota winter slows down the clock. On the bright side, the seed catalogs are sprouting in the mail box. I've taken a seed inventory and placed a couple orders. Seed prices along with shipping and handling have gone up so I'm cutting back a bit on the mail purchases. This seems like a good time to catch up the blog where I left off last year.
Posted by JohnT at 9:35 AM 3 comments:

The Dodge County Fair started this week. This event is the halfway mark of our summer in Minnesota. I've been able to harvest some beets and summer squash. Here are my tomato plants showing a few green ones on the vine. 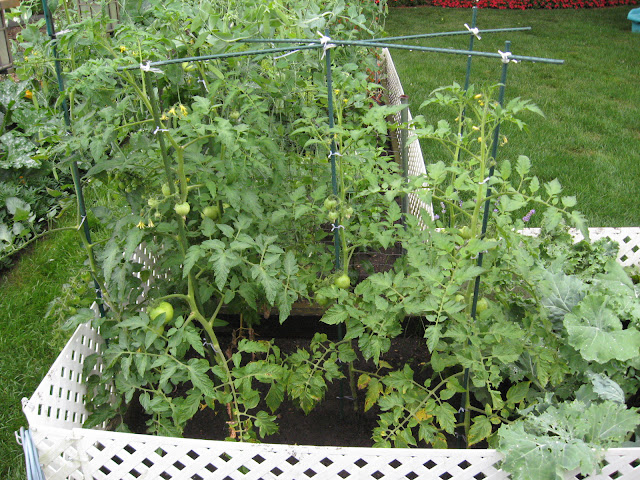 The squash and zucchini are growing nicely. 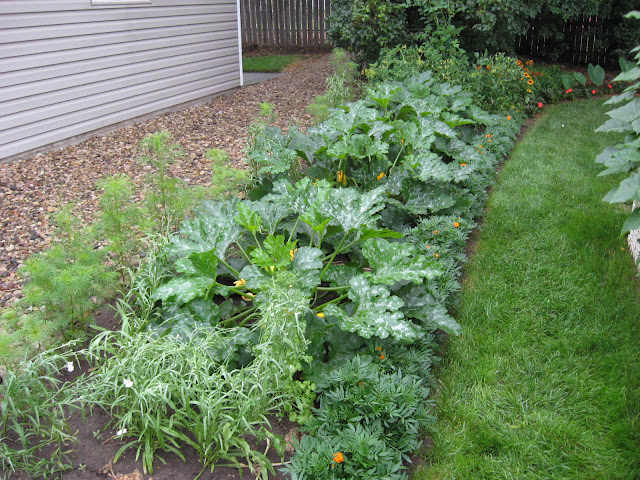 The variety of these are touted as easy pick. See how they grow straight up on the plant? 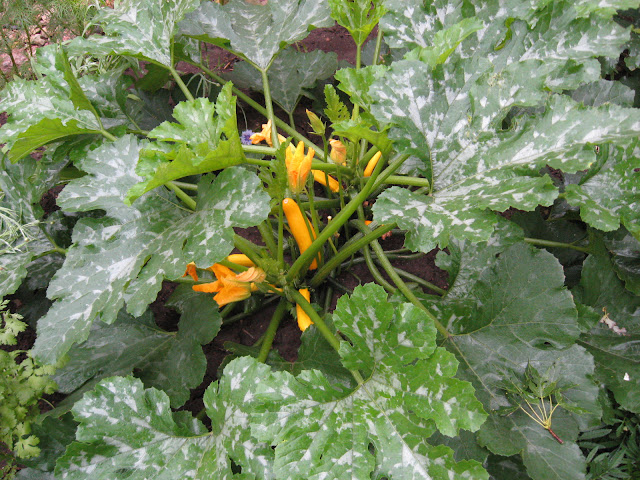 This is my bean field with yellow, green, and purple beans. 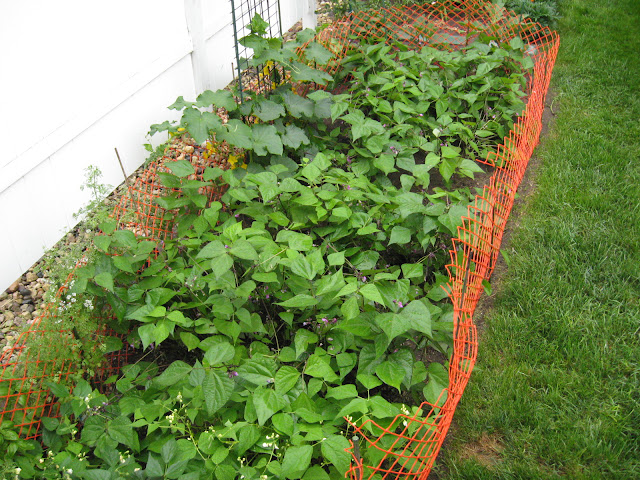 A better look at the purple beans that are flowering. 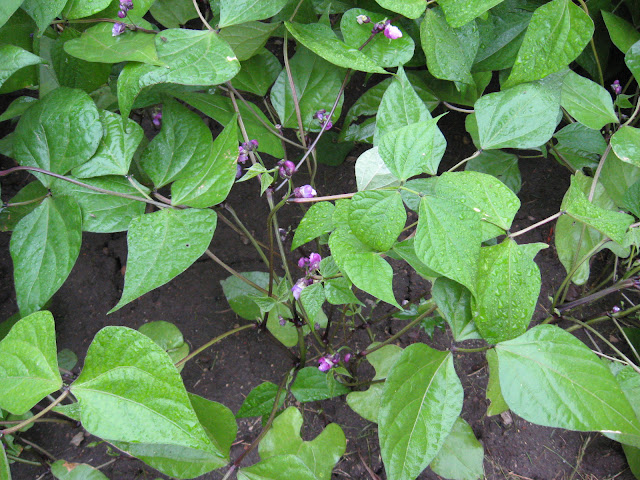 I'll post more information on these beans when they are closer to harvesting.
The cucumbers are really vining, no fruit yet, just blossoms. 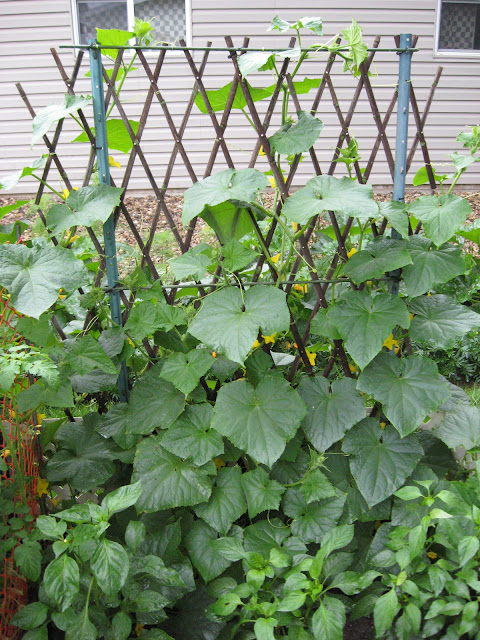 And speaking of vining, my peas are just about ready for eating. These never make it into the house, they are picked and eaten in almost the same motion. 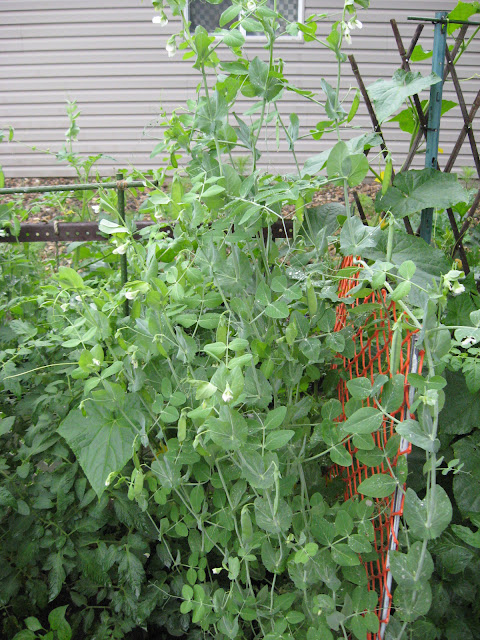 So a lot of things going on in the garden at this halfway mark. We're getting a nice gentle rain today and it looks like the cornfields are beginning to tassel. Soon the days will feel shorter, but for now we enjoy the certainty that it's summer.
Posted by JohnT at 4:23 PM No comments:

From seed to garden

My pepper and tomato plants are planted in the garden. In past posts I've shown the progression of seed germination to seedlings in packs. As the pepper plants matured I had to give them some room to grow. I discovered an effective way to allow them more room. 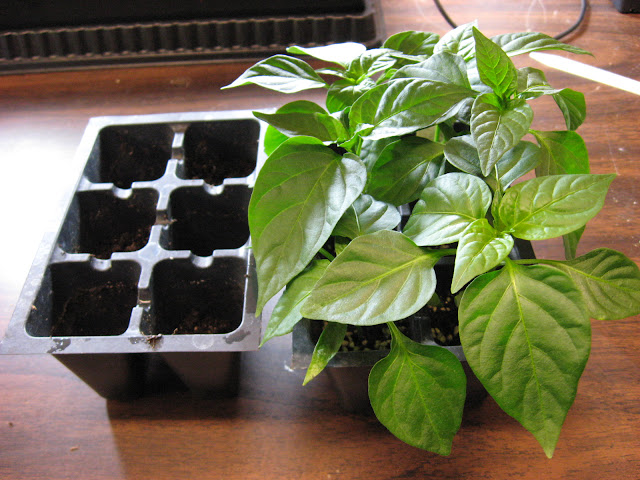 By taking three of the plants out of the six-pack and spacing them in another pack. 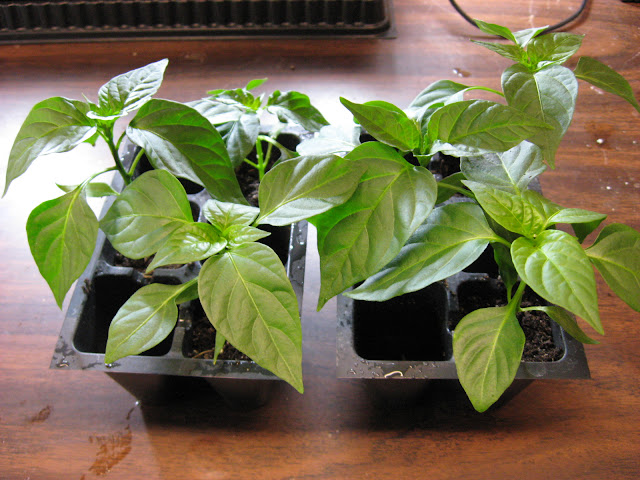 This method allows them room to mature. Some of the larger pepper seedlings needed even more room so those were transplanted to recycled yogurt cups. But the downside as you can see is it starts to crowd the grow center. Here's the peppers under the florescent lights taking up the space that the tomatoes will need. 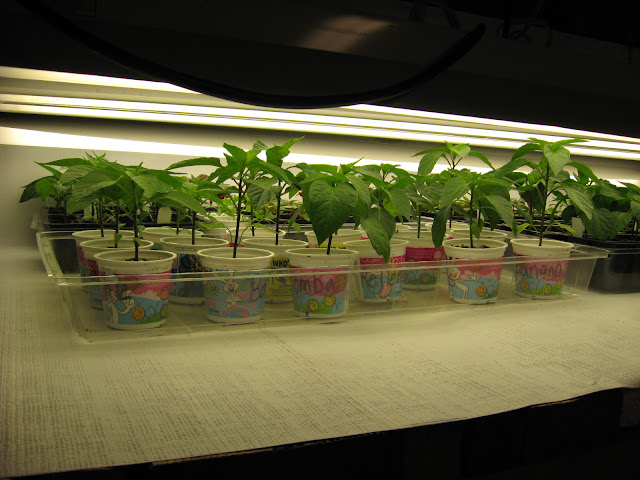 So even though it was a cool spring, the peppers went out to the cold frame. 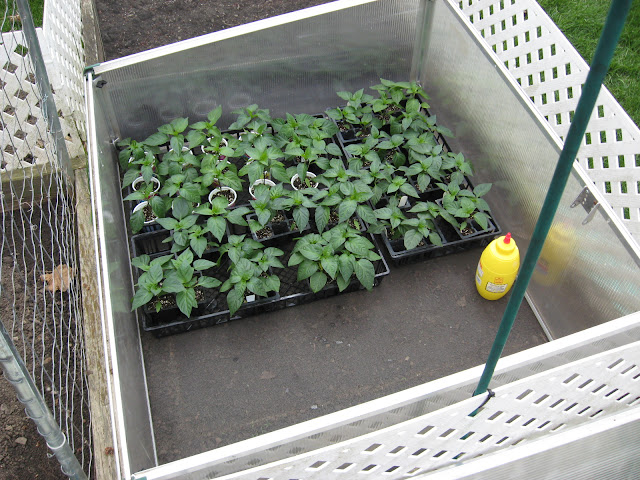 There was one evening that I had to put the milk-house heater in the cold frame to keep them warm. The recycled mustard bottle is my tool for watering each pepper plant. While the peppers grew in the cold frame, my tomatoes now went under the lights. Here's a picture of them along with some eggplant and basil seedlings. 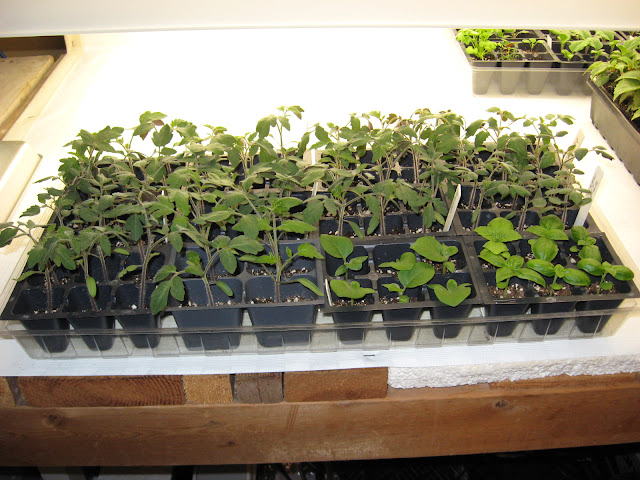 Now in Minnesota the weather doesn't really settle until after Memorial Day. And this year the holiday was early. So for the last couple of weeks I've been slowly planting the seedlings into the garden. Here are the pepper plants in the raised bed. 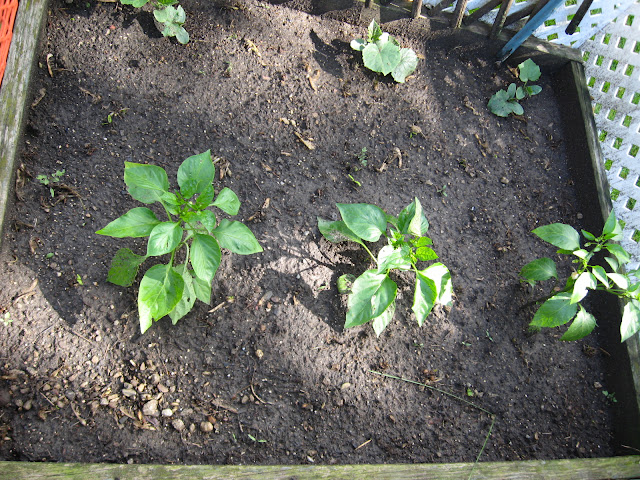 The top of the photo are cucumbers that are suppose to grow in a compact form. Here is a close up of the Sweet Banana pepper on the right. It already has fruit! 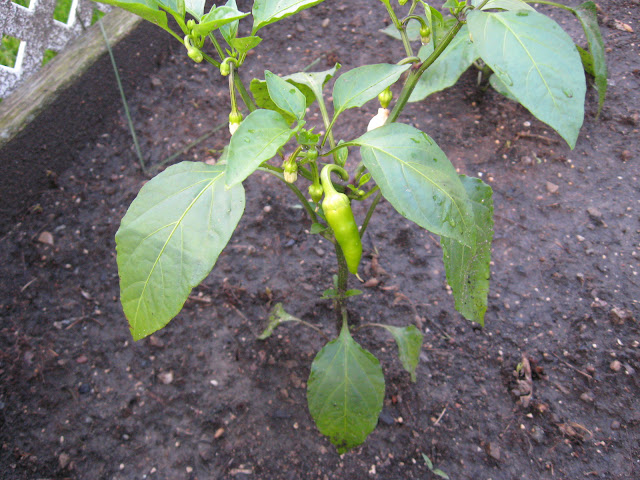 And this is a picture of the tomatoes. I may have them too close together, we'll see as they mature. 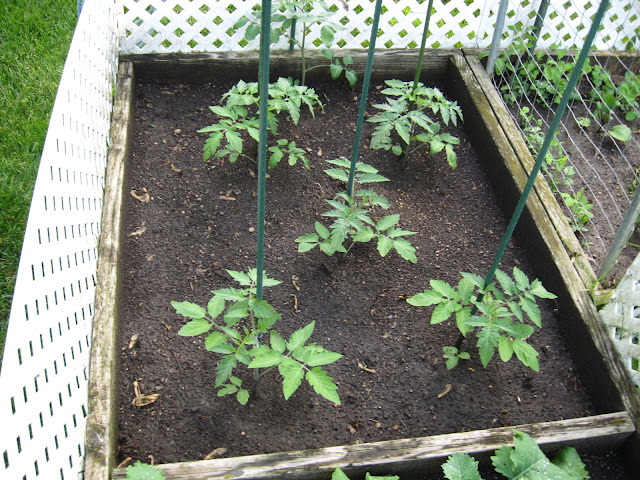 Lastly, for the edibles, a picture of my Siberian Kale and beets. 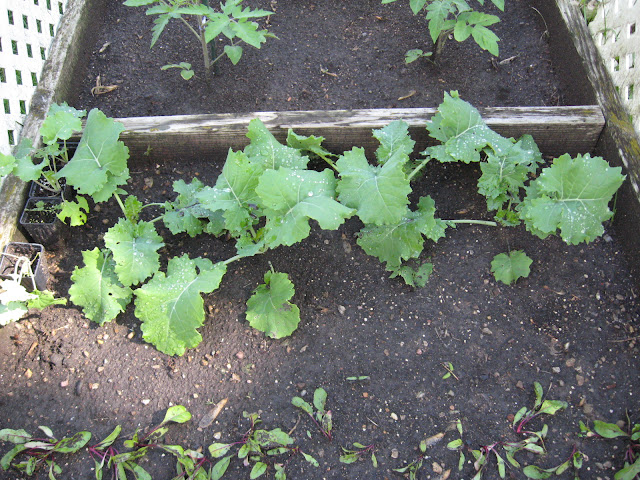 Yesterday the garden was in great shape. Today the forecast is 2 to 4 and maybe more, inches of rain. Well, at least it's not snow. And for tomorrow sunshine!